Presently, this gallery is made up of pictures I took while serving in Vietnam. I was on active duty in the US Navy from Mar. 2, 1971 to Feb. 28, 1975. I volunteered for aviation in the hopes of getting to be a photographer's mate, but they made me an aviation electronics technician instead. Go figure. I was assigned to HC-3, Helicopter Combat Support Squadron 3. We were deployed on auxiliary ships to perform vertical replenishment, or vert rep for short, to the 7th Fleet serving off the coast of Vietnam. My first detachment was Detachment 101 on the USS Mt Hood, AE 29, and we were the longest serving sea detachment at that time. We were deployed in April of '72, and came back in April '73. Nixon extended our cruise. Our one cruise to Vietnam counted as two. My squadron was rewarded the Meritorious Unit Commendation ribbon and the Battle E for our efforts.

The crash on the USS Cone DD866 happened on Dec. 11, 1972. A Sunday. We were flying mail out to the fleet and had 2500 lbs. of mail onboard along with two postal clerks. The Cone was a 6th Fleet ship that was sent to Vietam. They weren't used to the way we did vert rep and they left a deck winch out. Which was fortunate for us. When the fuel control valve malfunctioned causing the crash, it was the deck winch that kept us high enough that our rotors didn't hit the gun mount. Our pilot, Lt. Jim Thompson, said it was his sterling skills that saved us. I think God was merciful and saved us. I wouldn't be here now had the rotors hit that mount.

While crossing the Pacific to Vietnam I bought my first two 35mm cameras, A Yashica and a Mamiya Sekor, with 2 lenses, a 50mm and a 135mm. Both cameras were among the first to have built in light meters. They served me well at the time, and were great to learn on. The photographs in this gallery, except the first, were taken with them.

In the Vietnam war zone we were mainly on Yankee Station, which went from Danang to the DMZ. We were also a part of an armada that went north of the DMZ, off the coast of North Vietnam, and it included Marine assault ships. We were able to see, hear, and feel the B52 bombings at night. Awesome. Unforgettable.

The first picture in this gallery, Vietnam Campaign, is also in my Art Photography gallery. I'm making it available as prints, and considering having it made into a poster. I am also making all the photos in this gallery available for publication, and prints. Please contact me for usage needs, and inquiries for prints. 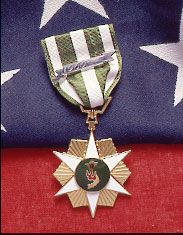 Picking Up a Load, CS

Coming in for a Load, CS

Hooking Up a Load, CN